London born Andrews is the owner and head admin of Reality Gaming. He started his first clan within Delta Force (PC 1998) and started playing the original C&C series competitively on-line. Turning 22 he created the 26 air mobile brigade, a large 50 man strong Air Assault unit within MOHAA (PC 2002) this was aided several by soldiers from the United Kingdom.

Learning much from these leaders of men, Andrews quickly went on to launch the Deadly Dozen, a small group of highly skilled competitive Call of Duty (PC 2003) players from Europe.

The Deadly Dozen achieved several awards, ranging from UK no1 in the clan base ladder to smashing sponsored teams at i-23 (multiplay LAN) where they won cash prizes and became sponsored themselves.


At 24 Andrews started a family and retired as a clan leader. Following 3 years of adjustment into his new role as a Dad and losing 90% of his "cat like" sniper reflexes, Andrew decided to create a place where he could retire from the high octane pace of competitive gaming and relax among friends.

This casual community would focus more on realism and creating unique experiences for mature like minded milsim soldiers while allowing flexibility.


In 2007 Andrew co-created Operation Reality, a unique project to conduct large scale tournaments and campaigns within ARMA. After several years of developing, researching and perfecting our goal, Andrew created Reality Gaming in 2010.

As a community leader and senior manager with over 15 years of experience, his guidance and direction have helped build our great community.

Following its reveal in May, Bohemia Interactive today published a brand-new trailer (watch on YouTube) for the anticipated upcoming Arma 3 spin-off expansion, Arma 3 Contact – which is scheduled for arrival on Steam on July 25, 2019.

Narrated by Game Designer Scott Alsworth, the new trailer goes beyond Arma 3 Contact’s extraterrestrial components – such as its military science fiction singleplayer campaign – to present a showcase of all the other sandbox assets that the Contact expansion will deliver to the wider Arma 3 platform, including a massive terrain, new factions, weapons, vehicles, and more.

Trailer, screenshots, logo, and key art are available for download below.

The largest addition is a 163 square kilometer Eastern European terrain, which covers the partly abandoned Nadbór region within the larger Polish-speaking country of Livonia. This temperate summer environment is characterized by its many coniferous forests, open wheat fields, towns, railroads, the Biela river, and many interesting landmarks such as an old munitions factory, an abandoned radar station, and dozens of old bunkers from World War II.

To support the new locale, Arma 3 Contact will introduce two small-yet-capable new factions to the game. These are the local Livonian Defense Force and the Russian Spetsnaz. Each of these will be equipped with their own gear and have access to a customized arsenal, and will be complemented by new character faces, as well as Polish or Russian radio protocols. Moreover, the expansion will add 5 new weapons and an unlikely pair of new vehicles in the form of the Mini UGV and Tractor.

In response to first contact, there will also be various new game assets that are more closely connected to the theme of Arma 3 Conta ct ’s singleplayer campaign. These might have scripted gameplay functionality within the campaign, but will still be available as cosmetic-only items to players and content creators for use in the Arma 3 sandbox (e.g. multiplayer and scenario editor). Perhaps the most striking of these additions is the gear related to CBRN defense, consisting of over-garments, face masks, and breathing apparatus backpacks.

Lastly, Arma 3 Contact will bring along a variety of free bonus content for everyone who owns Arma 3. Specifically, NATO forces will be able to make use of a new woodland camouflage option providing better concealment in the Livonia terrain. Meanwhile, the local civilian population will see its wardrobe expanded with new outfits for farmers, looters, and scientists. To reinforce content creation, all Arma 3 players will receive more than 100 new terrain assets and decorative objects to use in their projects.

Not shown in this sandbox trailer is the headline act of the spin-off expansion: the story-driven "First Contact" singleplayer campaign. Here, the player will take on the role of NATO drone operator, Aiden Rudwell. When a massive alien vessel suddenly enters the Earth’s atmosphere, Specialist Rudwell joins an improvised taskforce and is sent out to investigate the extraterrestrial presence. However, amid the tension and chaos, armed conflict inevitably unfolds.

Arma 3 Contact is expected to land on July 25 and will be made available as DLC for Arma 3 on Steam. People can already pre-order the expansion on Steam and the Bohemia Store for 24.99 EUR / 27.99 USD / 21.99 GBP (plus a temporary 10% discount until one week after release). This will also grant them immediate Sneak Preview Access to the new Livonia terrain, weapons, and more.

Those who are new to Arma 3 might want to get the Arma 3 Contact Edition or the recently introduced Arma 3 Ultimate Edition, which bundle the Arma 3 base game with Arma 3 DLC at a heavily discounted price. Fans might be interested in the Bohemia Store-exclusive Arma 3 Contact Collector’s Edition (available here). This limited-edition includes the game and expansion, and more than five unique collector’s items such as a rugged field case, topographic map, two-way radio transceivers, tin foil hats, and more. 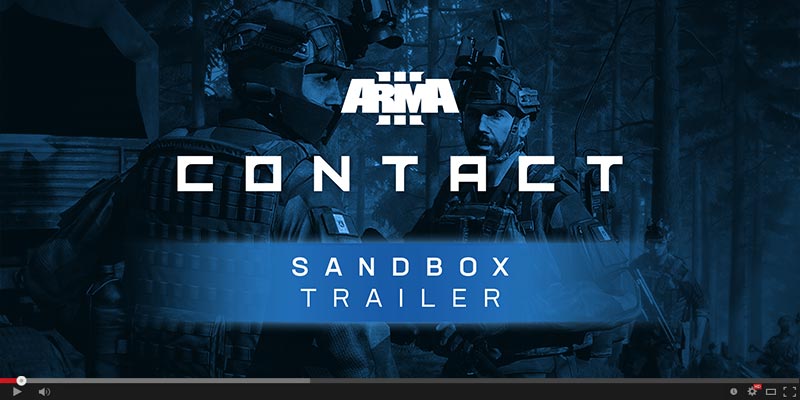 "This trailer/video may only be displayed if it is behind an age-gate that: (1) is age-neutral (i.e., requires the user to input their date of birth or select it from a drop-down bar; (2) employs reasonable technical measures to keep underage users from re-entering their age after initially being denied access; and (3) does not display any ESRB rating information on the video player or the age-gate itself. Failure to implement these requirements may jeopardize your ability to obtain material of this nature from us in the future."

Everyone who supports RG from now until the end of July 2019 can wear this ribbon in their signature with Pride.

Thanks to bone for the artwork:

Cpt.Stabcon will make the official D11 post and introduction shortly.